If you are in the market for a 36-volt inverter, you are on the right page. My goal is to help you cut down on time you will need for research by highlighting the best 36-volt inverters online.

Why buy a 36 volt inverter?

What is a  36 Volt inverter? It is a device that converts 36V Direct Current to 120V (110v) Alternating current. In other words, it is a device that can take current from a bank of batteries (36V) and convert it to the power supplied in the grid to power your appliances and devices.

In some cases, you may decide to use them for appliances that are 2000Watts.

When you use a 36-Volt inverter, you can use regular and more flexible connectors to connect the inverter to the battery bank. Keep in mind that the thinner the wire, the higher the resistance. If your DC voltage is lower, you will pass more current through the cables, and in addition to getting very hot, you lose a lot of battery power.

Find below a list of 36-volt inverters available online and more information about different types of inverters. 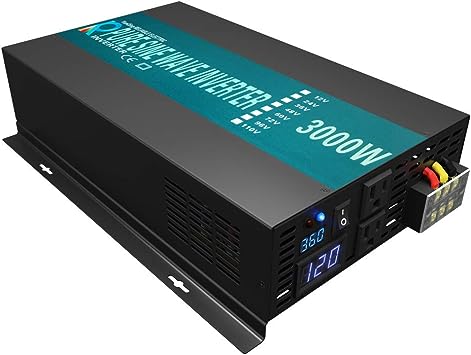 In the 36-volt category, WZELB makes a very good inverter. The inverter comes with cables, a replacement fuse, and numerous safety features such as overload, overvoltage, short circuit shutdowns, etc. This inverter is also flexible and easy to use with 2xAC outlets, a digital display, and a terminal block for hard wiring. 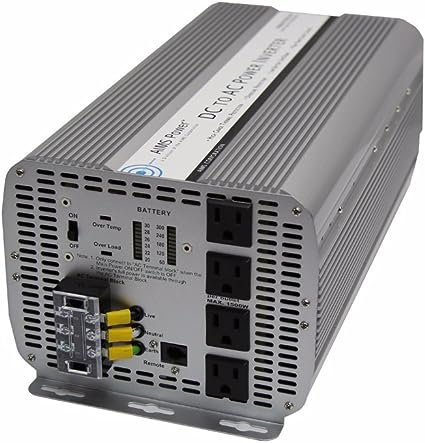 AIMS 5,000W modified inverter with 10,000 peak is a serious inverter for running equipment for your off-grid projects. This inverter has 4xAC receptacles, is wired for a remote on/off switch, AC Direct wiring terminal, and numerous protections - Over Temperature protection, Overload protection, Single cooling fan operation thermally controlled, etc. This workhorse will provide you with the power you need. 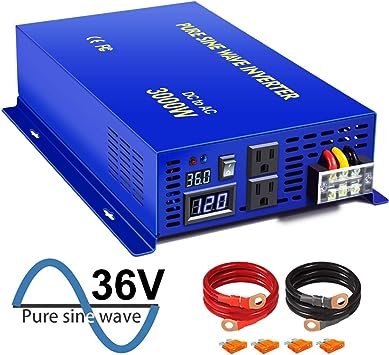 Criteria for choosing an Inverter.

Choosing the right inverter is important. To make the process as easy as possible, we have put together a list of key points to consider when selecting your inverter.

Rating: It is essential to determine the wattage required to operate the appliances. Although it may seem convenient to purchase an inverter large enough to run all desired appliances and accessories, the drawback will be the inverter’s added cost. It is important to confirm the exact power requirements of all electrical appliances and accessories you will be using simultaneously. Do not underestimate normal usage. Doing so will only lead to disappointment and more expense. Here is a rating chart that will help you choose.

Noise: Noise is not a pleasant sound for anyone, especially in the 21st century, where everyone is busy and, as such, needs fewer distractions. Choosing an inverter with less noise is a choice that should not be ignored. If you plan to use your inverter for noisy power tools, you will not need to spend the extra money to buy a quiet inverter.

Many higher wattage inverters also come with hard-wire ports that let you connect the inverter to your cabin’s or home’s power distribution system. In this case, you may not need the power outlets.

The number of USB Ports: Some power inverters come with Universal Serial Bus (USB) ports, which allows you to charge a wide range of electrical and electronic appliances, including cellphones, laptops, game consoles, and power tools, and other household products. They come with or without power outlets there USB port feature allows smartphones, iPhones, Tablets, and other USB product users to charge their deviceeasilyse.

Safety Features: To prevent your battery from draining while charging, leaving you stranded, some inverters incorporate a safety feature that cuts off power to the inverter once a certain internal temperature is reached, i.e., before the battery is completely dead. Another essential safety feature that is beneficial and present in some models is the surge protector, which cuts power if a power surge or overload is detected.

Size: The inverter’s size is determined by the space in your boat, RV, or home area. Make sure the inverter can fit into the place you have for your inverter.

(Visited 54 times, 2 visits today)
Some of the links in this post are affiliate links. This means that when you click on one of these links, I earn a small commission at no extra cost to you. Also, as an Amazon Affiliate, I earn from qualifying purchases.