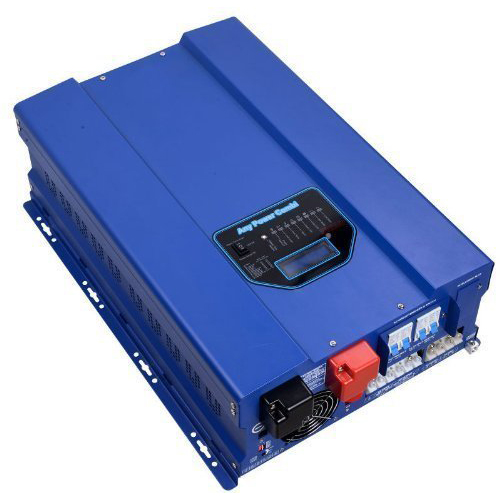 If you are in the market for a 48-volt inverter, you are on the right page. My goal is to help you cut down on time you will need for research by highlighting the best 48-volt inverters online.

Why buy a 48 volt inverter?

What is a  48 Volt inverter? It is a device that converts 48V Direct Current to 120V (110v) Alternating current. In other words, it is a device that can take current from a bank of batteries (48V) and convert it to the type that is supplied in the grid to power your appliances and devices.

You may decide to use them even for appliances that are 2000Watts.

When you use a 48-Volts inverter, you can use regular and more flexible connectors to connect the inverter to the battery bank. This is so because the thinner the wire, the higher the resistance. And if your DC voltage is lower, you will be passing more current through the wires, and they can get very hot, and you lose a lot of battery power.

Find below a list of 48-volt inverters available online and more information about different types of inverters.

Criteria for choosing the best inverter for your use.

Picking the right inverter is a very critical choice. To make the process as easy as possible for you, we have put together a list of key points to consider when choosing your inverter.

Rating: It is important to determine the wattage required to operate the appliances that are normally used. Although it may seem convenient to purchase an inverter large enough to run all desired appliances and accessories, the drawback will be the inverter’s added cost. It is important to confirm the exact power requirements of all electrical appliances and accessories you will be using simultaneously. Do not underestimate normal usage. Doing so will only lead to disappointment and more expenses. Here is a rating chart that will help you choose.

Noise: It is safe to say that noise is not a pleasant sound for anyone, especially when more people work at home and need little or no distraction. Choosing an inverter with little or no noise is a suitable choice that should not be ignored. If, however, you plan to use your inverter to power noisy tools, then you will not need to spend the extra money to buy a quiet inverter.

Many higher wattage inverters also come with hard-wire ports that let you connect the inverter to your cabin’s or home’s power distribution system. In this case, you would hardly need the power outlets.

The number of USB Ports: Some of the power inverters come with Universal Serial Bus (USB) ports, which allows you to charge a wide range of electrical and electronic appliances, including cellphones, laptops, game consoles, power tools, and other household products while in the car. They come in conjunction with the power outlets or without. Having the USB port feature allows smartphones, iPhones, Tablets, and other USB product users to charge their devices with ease.

Safety Feature: To prevent your battery from draining while charging, leaving you stranded, some inverters incorporate a safety feature that cuts off power to the inverter once a certain internal temperature is reached, i.e., before the battery is completely dead. Another important safety feature that is beneficial and is present in some models is the surge protector, which cuts power if a power surge or overload is detected.

Size: The inverter’s size is determined by the space in your boat, RV, or home area. Make sure the inverter can fit into the area you have made out for your inverter.

The LF inverters use a big copper transformer, so they are bigger, heavier, and more expensive. They are also better with equipment that requires high starting power, such as compressors and air-conditioners, especially if you regularly use this equipment and for long periods.

The HF inverters use smaller transformers and electronic components. They are lighter in weight and are less expensive. These are good for the occasional user. There is no need to spend so much money on an inverter if you will only use it for a few hours a week. These inverters are also perfect for electronic equipment and smaller devices, even when using them for several hours daily.